The CDC mask guidelines continue to require masking in health care facilities. Patients, staff and visitors must wear masks while inside our hospital and clinics. 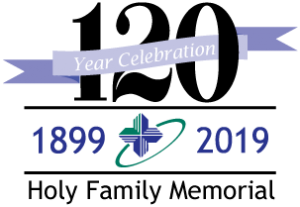 Holy Family Memorial (HFM) will celebrate its 120th anniversary with a public open house on Saturday, September 28, 2019. That day marks the actual date the original Holy Family Hospital opened its doors in 1899.

The anniversary celebration will be held in HFM’s Heritage Gardens and atrium from 2 – 4 p.m. A presentation featuring HFM President & CEO Brett Norell, Sister Natalie Binversie of HFM’s sponsors, the Franciscan Sisters of Christian Charity, and local officials will be held at 2:30 pm in the atrium. The afternoon will also include tours, entertainment and refreshments. The celebration will culminate with Mass in the HFM chapel at 4:00 p.m. in honor of the hospital’s 120th anniversary and the Franciscan Sisters of Christian Charity’s upcoming 150th celebration. All are invited.

Manitowoc was a bustling lakeport when Holy Family Hospital opened its doors. Yet before that time, health care in the area was virtually nonexistent. With 45 beds, ventilation, electricity and an elevator, it was the most modern hospital in the state at that time. All for a price tag of $75,000.

In 1991, Holy Family Medical Center and Manitowoc’s other hospital, Memorial Hospital, merged to become Holy Family Memorial. In 1998, 100 years after its inception, HFM began the Centennial Building Project. The Cancer Care Center was the centerpiece of the project, bringing state-of-the-art cancer care to the community.

Other expansions included the opening of Harbor Town Campus in 2005, bringing services and a Wellness Center to the west side of Manitowoc. A new Heart & Vascular Center and Women’s Imaging Center opened in 2006. In 2017, a new Lakefront Campus opened in Two Rivers, centralizing services for the community into one location.

Today, HFM offers inpatient and outpatient services, including walk-in care for both general health and orthopedic needs, more than 15 clinics, a retail pharmacy, a medically-based wellness center and a state-of-the-art rehabilitation facility.

Change continues to be part of health care—and of Holy Family Memorial. HFM is committed to carrying on the healing ministry of its founding Franciscan Sisters of Christian Charity through innovative and caring services and proudly looking forward to the next 120 years. For a more complete history of Holy Family Memorial, visit HFM Health Savvy Fall 2019.